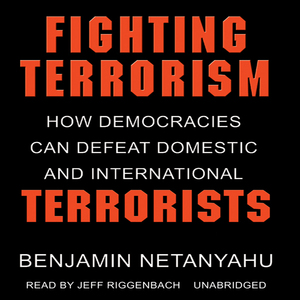 Audiobook Summary:The World Trade Center tragedy, the Oklahoma bombing, the sarin-gas attack in Japan, raise grave questions: Where did this rising tide of terror come from? Is it here to stay? How can this new terrorism be stamped out? In this newly revised edition of Fighting Terrorism , Benjamin Netanyahu, the leader of Israel's Likud Party and a noted authority on international terrorism, offers a compelling approach to understanding terrorism. Citing diverse examples from Germany, France, Italy, and elsewhere, Netanyahu demonstrates that domestic terrorist groups are usually no match for an advanced technological society, which can successfully control terror without any significant curtailment of civil liberties. But Netanyahu sees an even more potent threat from the new international terrorism that has emerged recently. From Beirut to Buenos Aires to Manhattan, it is increasingly the product of Islam militants, who draw their inspiration and directives from Iran and its growing cadre of satellite states. The spread of fundamentalist Islamic terrorism, coupled with the possibility that Iran will soon acquire nuclear weapons, poses a more frightening threat from an adversary less rational and therefore less controllable than was the Soviet Union. How democracies can defend themselves against this new threat concludes this innovative and concise work.