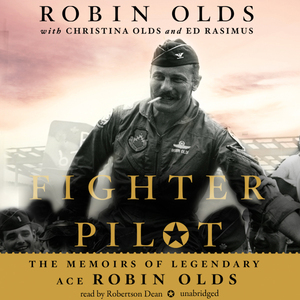 Audiobook Summary: A larger-than-life hero with a towering personality, Robin Olds was a graduate of West Point and an inductee in the National College Football Hall of Fame for his All-American performance for Army. In World War II, Olds quickly became a top fighter pilot and squadron commander by the age of 22 - a double ace with 12 aerial victories. But it was in Vietnam where the man became a legend. He motivated a dejected group of pilots by placing himself under junior officers and challenging them to train him properly. He led the wing with aggressiveness, scoring another four confirmed kills and becoming a rare triple ace. With his marriage to Hollywood actress and pin-up girl Ella Raines, his nonregulation mustache and penchant for drink, Olds was a unique individual whose story is one of the most eagerly anticipated military books of the year. Christina Olds, the daughter of Robin Olds, holds a B.A. in English and creative writing from Vassar, is a member of the Air Force Association, and is the first honorary lifetime member of the Red River Valley Association. Ed Rasimus is a retired USAF fighter pilot who holds a B.S. in political science and an M.S. in both political science and international relations. He has previously written two books on the Vietnam air war, When Thunder Rolled and Palace Cobra .