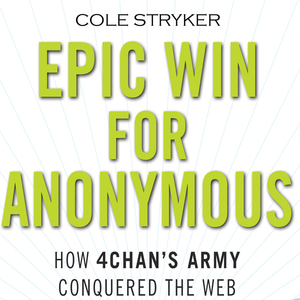 Audiobook Summary: 4chan is the "Anti-Facebook", a site that radically encourages anonymity. It spawned the hacktivist group Anonymous, which famously defended WikiLeaks founder Julian Assange by bringing down MasterCard's and Visa's websites. Created by a 15-year-old wunderkind in 2003, it is the creative force behind "the Web's most infectious memes and catchphrases" ( Wired ). Today it has over 12 million monthly users, with enormous social influence to match. Epic Win is the first book to tell 4chan's story. Longtime blogger and 4chan expert Cole Stryker writes with a voice that is engrossingly informative and approachable. Whether examining the 4chan-provoked Jessi Slaughter saga and how cyber-bullying is part of our new reality, or explaining how Sarah Palin's email account was leaked, Epic Win for Anonymous proves 4chan's transformative cultural impact, and how it has influenced - and will continue to influence - society at large.