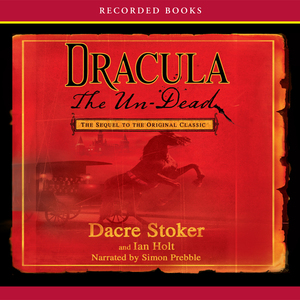 Audiobook Summary: Dracula the Un-Dead is a bone-chilling sequel based on Bram Stoker's own handwritten notes for characters and plot threads excised from the original novel. Dracula the Un-Dead begins in 1912, 25 years after Dracula "crumbled into dust". Van Helsing's protege, Dr. Jack Seward, is now a disgraced morphine addict obsessed with stamping out evil across Europe. Meanwhile, an unknowing Quincey Harker, the grown son of Jonathan and Mina, leaves law school for the London stage, only to stumble upon the troubled production of Dracula directed and produced by Bram Stoker himself. The play plunges Quincey into the world of his parents' terrible secrets, but before he can confront them, he experiences evil in a way he had never imagined. One by one, the band of heroes that defeated Dracula a quarter-century ago is being hunted down. Could it be that Dracula somehow survived their attack and is seeking revenge? Or is their another force at work whose relentless purpose is to destroy anything and anyone associated with Dracula?