Disrobed: The New Battle Plan to Break the Left's Stranglehold on the Courts (Unabridged) 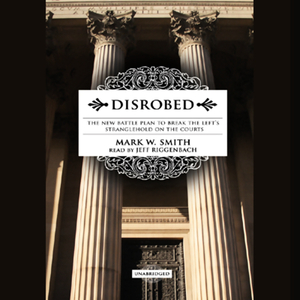 Audiobook Summary:Forget everything you think you know about the courts and arm yourselves with this brand-new, urgently needed battle plan to defeat the Left's legal assault on America. America's courts, legal culture, and law schools remain solidly in the Left's camp. Unless there is a sweeping change, precisely what best-selling author Mark W. Smith calls for in Disrobed , liberals will ruthlessly exploit their dominant position in the law to continue advancing their radical agenda, as they have for the past 70 years. Smith, a nationally recognized attorney, lays out an aggressive new battle plan to thwart the liberal assault on America by turning the courts into allies of the conservative movement. He reminds us that courts, judges, and lawyers need not be enemies of the Right, and can even serve as valuable allies in the war against liberalism. Disrobed issues a call to arms to all conservatives, revealing that the courts are far too important to be left to the devices of academics, lawyers, and politicians.