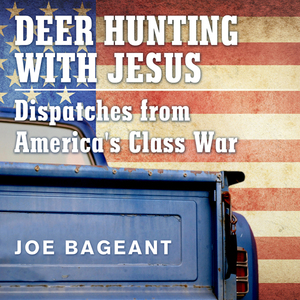 Audiobook Summary: After 30 years spent scratching together a middle-class life out of a "dirt poor" childhood, Joe Bageant moved back to his hometown of Winchester, Virginia, where he realized that his family and neighbors were the very people who carried George W. Bush to victory. That was ironic, because Winchester, like countless American small towns, is fast becoming the bedrock of a permanent underclass. Two in five of the people in his old neighborhood do not have high-school diplomas. Nearly everyone over 50 has serious health problems, and many have no health care. Credit ratings are low or nonexistent, and alcohol, overeating, and Jesus are the preferred avenues of escape. A raucous mix of storytelling and political commentary, Deer Hunting with Jesus is Bageant's report on what he learned by coming home. He writes of his childhood friends who work at factory jobs that are constantly on the verge of being outsourced; the mortgage and credit-card rackets that saddle the working poor with debt, i.e., "white trashonomics"; the ubiquitous gun culture - and why the left doesn't get it; Scots Irish culture and how it played out in the young life of Lynddie England; and the blinkered "magical thinking" of the Christian right. (Bageant's brother is a Baptist pastor who casts out demons.) What it all adds up to, he asserts, is an unacknowledged class war. By turns brutal, tender, incendiary, and seriously funny, this book is a call to arms for fellow progressives with little real understanding of "the great beery, NASCAR-loving, church-going, gun-owning America that has never set foot in a Starbucks". Deer Hunting with Jesus is a potent antidote to what Bageant dubs "the American hologram" - the televised, corporatized virtual reality that distracts us from the insidious realities of American life.