Crusade: The Untold Story of the Gulf War, Volume 2 (Unabridged) 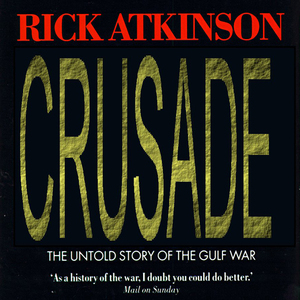 Audiobook Summary:Throughout the Gulf War of 1991, the allied governments and the Pentagon combined to impose unprecedented restrictions on the media's access to the battlefield. As a result, the true story of that brief, brutal conflict has remained untold. Now, after two years of intensive research, Rick Atkinson has written what will surely come to be recognized as the definitive chronicle of the war. Crusade follows the unfolding battle from the first night to the final day, providing vivid accounts of bombing runs and White House strategy sessions, firefights and bitter interservice conflicts. He brings to life a rich cast of characters: Norman Schwarzkopf, a man very different from his public image; Colin Powell, whose motto is "Never let them see you sweat"; a host of senior officers; and men such as David Eberly, who was shot down over Iraq and barely survived imprisonment in Baghdad. As individual stories weave into the larger narrative, we come to understand that the allied campaign against Saddam Hussein was a wholly new kind of war, one that has transformed the nature of modern warfare. Astonishingly immediate, fresh and powerfully written, Crusade is not only the first full account of the Gulf War, but should become a classic of 20th-century reportage. Don't miss Crusade, Volume 1.