Crossing Mandelbaum Gate: Coming of Age Between the Arabs and Israelis, 1956-1978 (Unabridged) 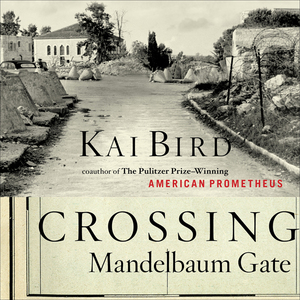 Audiobook Summary: Through a blend of memoir and history, Pulitzer Prize-winning writer Kai Bird recounts the Western experience in the Middle East and just why it has been so turbulent. Through Bird 's Zelig-like presence, the reader experiences the Suez War of 1956, the June 1967 War, and the Black September hijackings of 1970 that led to the Jordanian Civil War. Bird's memoir also shows how all of these momentous events led to the rise and tragic downfall of a secular Arab nationalist ethos - only to be replaced by the rise of a fundamentalist, politically reactionary Islamist movement. In narrative history, Bird tells the stories of such illuminating figures as life-long Jerusalem resident George Antonius, author of The Arab Awakening , and his charismatic wife; Jordan's King Hussein and his CIA connections; the businessman Salem bin Laden, Osama's older brother and a family friend; Saudi kings Faisal and Khalid; President Nasser of Egypt; and Leila Khaled, the striking young Palestinian radical who hijacked one of the Black September planes. Bird's personal insights and unique connections create a portal into the sensibilities and psyche of these lands that is sure to fascinate both those fluent in the history of the Middle East and the many who simply want to understand this region that the West seems to be both fighting for and against.