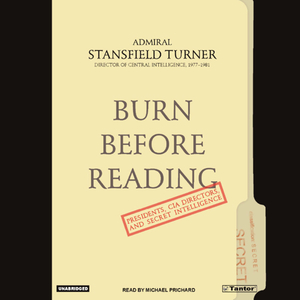 Audiobook Summary:The way the U.S. government gathers intelligence information has become front-page news. In Burn Before Reading , former CIA director Admiral Stansfield Turner highlights pivotal moments between presidents and their CIA directors, detailing the decisions that continue to shape the intelligence community and our world. This behind-the-scenes look at the CIA's relationship with the presidents, from World War II to the present day, reveals how intelligence gathering works, and how personal and political issues often interfere with government business. In Burn Before Reading , we learn: Why President Harry Truman distrusted the CIA yet ended up expanding it. How President John F. Kennedy entrusted his reputation to the CIA at the Bay of Pigs in Cuba and got burned. That President Nixon strongly mistrusted the "Ivy League" CIA and tried, unsuccessfully, to use it as a way out of Watergate. That President Gerald Ford was confronted with three reports of egregious and illegal CIA misdeeds, and how he responded by replacing CIA director Colby with George H. W. Bush. Drawing on his own personal experience, as well as interviews with living presidents, Turner takes us into the White House and shares with us an intimate view of the inner working of our government's intelligence agency. There has never been a time when the relationship between the president and the head of the CIA has been so scrutinized or so relevant to our government policy. This book concludes with a blueprint for reorganizing the intelligence community and strengthening the relationship between the CIA and the president.