Beyond Band of Brothers: The War Memoirs of Major Dick Winters (Unabridged) 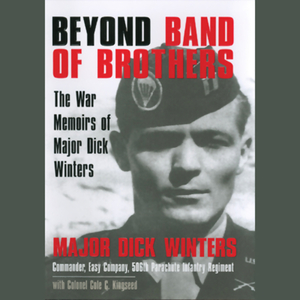 Audiobook Summary:In war, great commanders lead soldiers into hell to do the impossible. They were called Easy Company, but their mission was never easy. Immortalized as the Band of Brothers, they suffered huge casualties while liberating Europe in an unparalleled record of bravery under fire. Dick Winters led them through the Battle of the Bulge, the attack on Foy, where Easy Company reached its breaking point, and finally into Germany, by which time each member had been wounded. Outside Munich, they liberated an S.S. death camp and captured Berchtesgaden, Hitler's alpine retreat. Beyond Band of Brothers is Winters' memoir, based on his wartime diary, but it also includes his comrades' untold stories. Only Winters was present from the activation of Easy Company until the war's end. This is their story, told in his words for the first time.