At the Center of the Storm: My Years at the CIA 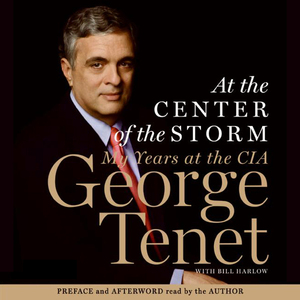 Audiobook Summary:In the whirlwind of accusations and recriminations that has attended the post 9/11 world, one man's vital testimony has been conspicuously absent. Candid and compelling, At the Center of the Storm is George Tenet's memoir of his life at the CIA - a revelatory look at the inner workings of America's top intelligence agency and its dealings with national leaders at home and abroad. With unparalleled knowledge and breadth, Tenet illuminates how the country was prepared, and in some respects was not prepared, to deal with a world full of new and deadly threats. Beginning with his installation as director of Central Intelligence in 1997, Tenet unfolds the momentous events that led up to 9/11: his declaration of war on Al Qa'ida, his worldwide operational plan to fight terror, his warnings to White House officials, and the plan for a response laid down just six days after the attack. Tenet also reveals the CIA's efforts since 9/11 to hunt down the fugitive members of Al Qa'ida's leadership. In his gripping narrative of the run-up to the war in Iraq, Tenet provides fresh insights and background, including a privileged account of how the famous "sixteen words" made it into the president's State of the Union speech, the real context of his own now-famous "slam-dunk" comment, and the CIA's views of the rise of an Iraqi insurgency. Finally, as the country digs in for a prolonged war, he gives his thoughts on how we can forge a more secure world. 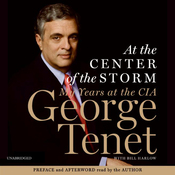 At the Center of the Storm