All Brave Sailors: The Sinking of the Anglo Saxon, 1940 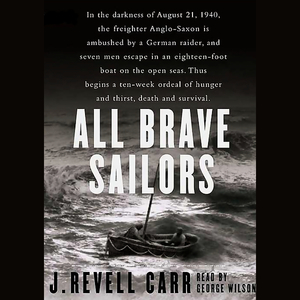 Audiobook Summary:In the darkness before moonrise on the Atlantic Ocean off the African coast on August 21, 1940, the night erupted in a fusillade of bullets and shells. The victim was a stalwart English tramp steamer, Anglo Saxon , part of the lifeline that was keeping besieged England in supplies. The attacker appeared to be a merchant ship from a neutral country. As it neared its prey, the German raider dropped its disguise, unmasked its hidden armament and destroyed the target ship with an overwhelming force. Only seven of the 41 man crew of Anglo Saxon managed to escape in a small boat. Seventy days later two of them stumbled ashore in the Bahamas, half dead. This riveting account of the sailors' ordeal reveals how first the badly wounded and then the less strong died and were thrown over the side of a fragile boat carrying meager supplies. As the two survivors reached the Bahamas, the Widder arrived in occupied France, her murderous voyage over. Her captain, Hellmuth von Ruckteschell, who had sunk 25 ships, was eventually tried as a war criminal. All Brave Sailors , a story of heroism, brutality, and survival, tells the story of merchant marine ships fighting against great odds in the early days of the war.