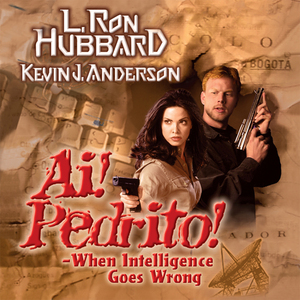 Audiobook Summary: It has been said that somewhere in the world you have an exact double. This rocket-ride of a novel ignites with the sudden cry of "Ai! Pedrito!" as Naval Lieutenant Tom Smith discovers that his exact look-alike is the notorious South American revolutionary and spy Pedrito Miraflores. Pedrito, while admired by many, leaves behind a throng of foes out for his blood when he heads north to assume Smith's identity. Smith, meanwhile, has been out-foxed, arriving in South America for a quiet vacation, only to be attacked in a setup by a foreign intelligence agency. As the intrigue builds and the plot unfolds, New York Times best-selling authors L. Ron Hubbard and Kevin J. Anderson take Smith - and the listener - on a rollicking and unpredictable adventure through the world of spies and double agents, lovers and enemies (often one and the same). Inspired by a real incident in the life of L. Ron Hubbard, Ai! Pedrito! is a fun-to-listen-to, compelling novel of what can sometimes happen when intelligence goes wrong!