Afghanistan: A Military History from Alexander the Great to the Fall of the Taliban (Unabridged) 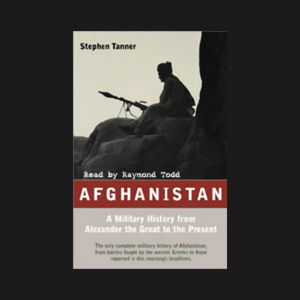 Audiobook Summary:For more than 2,500 years, the forbidding territory of Afghanistan has served as a vital crossroads not only for armies but also for clashes between civilizations. As a result of the United States' engaging in armed conflict with the Afghan regime, an understanding of the military history of that blood-soaked land has become essential to every American. Afghanistan's military history provides lessons for us today. The earliest written records inform us of fierce mountain tribes on the eastern edge of the cradle of civilization. Alexander the Great conquered Afghanistan on his way from Persia to India. Later, because of its strategic location (the Silk Road passed through its mountainous northern region) Afghanistan was invaded in succession by Arabs, Mongols, and Tartars. In the nineteenth century, Great Britain tried, and failed, to add Afghanistan to its Indian empire, while Russia tried to expand into the same embattled land. Afghanistan once again fought, and defeated, a secular government in the face of rising Islamic resistance. America has faced a new enemy on this land, a land that for centuries has become a graveyard of empires past.