A Gate at the Stairs (Unabridged) 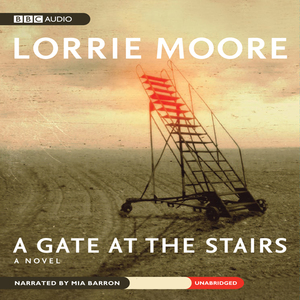 Audiobook Summary:In her dazzling new novel--her first in more than a decade--Moore turns her eye on the anxiety and disconnection of post-9/11 America, on the insidiousness of racism, the blind-sidedness of war, and the recklessness thrust on others in the name of love. As the United States begins gearing up for war in the Middle East, twenty-year-old Tassie Keltjin has come to a university town as a college student, her brain on fire with Chaucer, Sylvia Plath, Simone de Beauvoir. She takes a part-time job as a nanny, to a mysterious and glamorous couple. As the year unfolds and she is drawn deeper into each of these lives, her own life back home becomes ever more alien to her: her parents are frailer; her brother, aimless and lost in high school, contemplates joining the military. Tassie finds herself becoming more and more the stranger she felt herself to be, and as life and love unravel dramatically, even shockingly, she is forever changed.