A Brain Wider Than the Sky: A Migraine Diary (Unabridged) 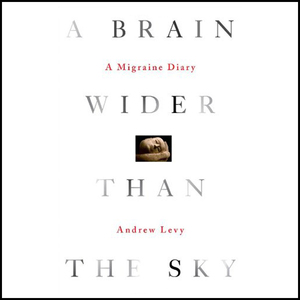 Audiobook Summary: With more than one in 10 Americans - and more than one in five families - affected, the phenomenon of migraine is widely prevalent and often ignored or misdiagnosed. By his mid-40s, Andrew Levy's migraines were occasional reminders of a persistent illness that he'd wrestled with half his life, though he had not fully contemplated their physical and psychological influence on the individual, family, and society at large. Then, in 2006, Levy was struck almost daily by a series of debilitating migraines that kept him essentially bedridden for months, imprisoned by pain and nausea that retreated only briefly in gentler afternoon light. When possible, Levy kept careful track of what triggered an onset - the "thin, taut" pain from drinking a bourbon, the stabbing pulse brought on by a few too many M&M's - and in luminous prose, he recounts his struggle to live with migraines, his meticulous attempts at calibrating his lifestyle to combat and avoid them, and most tellingly, the personal relationship a migraineur develops - an almost Stockholm syndrome-like attachment - with the indescribable pain, delirium, and hallucinations. Levy read about personalities and artists throughout history with migraine - Alexander Pope, Nietzsche, Freud, Virginia Woolf, even Elvis - and researched the treatments and medical advice available for migraine sufferers. He candidly describes his rehabilitation with the aid of prescription drugs and his eventual reemergence into the world, back to work and writing. An enthralling blend of memoir and provocative analysis, A Brain Wider Than the Sky offers rich insights into an illness whose effects are too often discounted and whose sufferers are too often overlooked.